What do you get when you bring scientists and magicians together?

magicology
n. The study of the neuroscience behind magic tricks and illusions.
A couple of years ago, Teller (from Penn & Teller) was invited by neuroscience researchers Stephen Macknik and Susana Martinez-Conde at the Barrow Neurological Institute in Phoenix, Arizona to look at the neuroscience of magic, to looks an the neuroscience of magic. The rationale behind this collaboration was that by studying magicians and their techniques, neuroscientists can learn powerful methods to manipulate attention and awareness. Such methods could then be exploited to directly study the behavioural and neural basis of consciousness itself, for instance through the use of brain imaging and other neural recording techniques [Paper available here]
In a more recent paper ‘Teaching HCI through magic’ [Available here] authors argued that  there is a deep connect between magic and HCI and that the mechanics and presentation of magic tricks mirror issues of algorithms and interfaces.More complex links to HCI also arise when we consider the importance of understanding how human attention works and the authors argue that the dynamics of human attention are crucial to the success of magicians’ misdirection. Similarly, just because a designer has presented information on the interface, it does not necessarily follow that the user will actually see the information.
Being slightly obsessed by mentalists and illusionists, you can understand how excited I was to see that I could put a positive spin on this obsession and approach it from a more scientific/professional angle. Hence why I chose to include Sleights of Mind in my Reading Challenge. 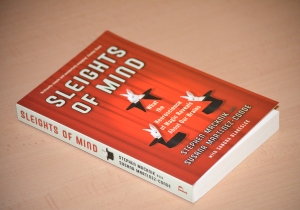 Have you ever wondered how magic effects work? Coins materialize out of thin air. Cards move through a deck as if pulled by an invisible force. Beautiful women are cut in half. how does a mentalist actually read your mind? How do they do it?

This is the opening line of the book by Stephen Macknik and Susana Martinez-Conde, this month’s book in my Reading Challenge. After spending the last few years travelling with magicians and learning tricks, Stephen and Susana wrote a story that sheds light on the greatest magic show on earth- the one that is happening in your brain right now!

If you are interested in finding out why we are so thoroughly vulnerable to tricks and illusions then you should definitely check this book out. This is not an academic textbook- it just explains how the brain works through a lens of neuroscience while using examples drawn from the world of magic to explain the fascinating mechanics of belief, attention and memory.