This month’s reading book challenge was definitely an interesting one. It is written by Brenda Laurel, a professor of Computer Science at the University of California and a personal inspirational figure of mine, as she has worked as an educator, researcher, designer, entrepreneur and author in the field of interactive media and virtual reality.Brenda has worked as a game designer, producer, and researcher for companies including Atari, Activision, and Apple.

Her book ‘Computers as Theater’ is considered a classic, as it was first published in 1991 and pursued the concept of addressing the design of technology through the lens of the dramatic arts. In this new edition (released in 2013), she looks back at how far we have come towards transforming the computer into a new expressive medium and discusses the technical and cultural problems that still remain as barriers to the design of future interactions.

The book is based on the concept that effective interface design, just like effective drama, must engage the user directly in an experience involving both thought and action.Laurel’s key point is that a user’s enjoyment must be a paramount design consideration, and she posits that it demands a deep awareness of dramatic theory and technique.

If you have doubts about what these two concepts have in common, just take a minute and think:

In drama, action is represented as a whole- and is created by the playwright, director, actors and audience.similarly, in HCI, the action is  collaboratively shaped by both designer and the person using the computer.

I can see how people might disagree on whether this awareness is in fact an absolute requirement, but I am personally of the opinion that although it might not be a ‘must’ it is definitely a very useful and creative metaphor to use when thinking about designing technology. 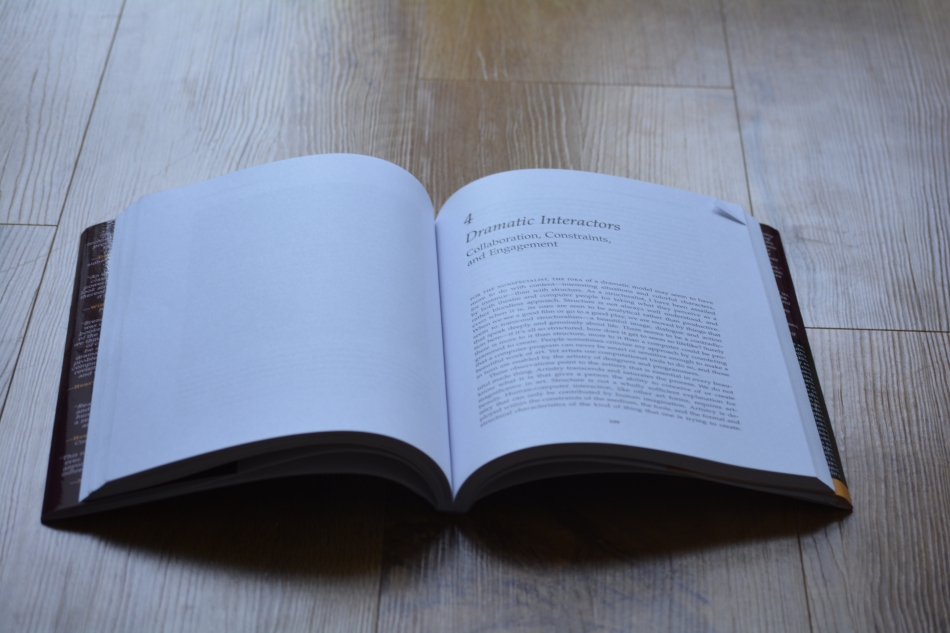 This is not a book that will give you guidelines and tips to how to design better, but it will help you understand how we interact with drama and enable you to draw parallels with how users interact with computers. It discusses design from a philosophical and academic perspective, but don’t let that put you off – I think this is a very inspirational book for designers as it offers a new approach to the design of human computer activity..I find it fascinating when I read classics that have been written so early in the history of digital media and yet are so valuable to contemporary designers today. This book is a great example of this.

I will finish this post with a quote from the book:

Designing human-computer experience isn’t about building a better desktop. It’s about creating imaginary worlds that can have a special relationship to reality—worlds in which we can extend, amplify, and enrich our own capacities to think, feel, and act