Over the past few years there has been a surge of activity in the field of design for the future and subsequently a number of frameworks and tools that promise to support and facilitate these activities. One type of the proposed frameworks is focused on a game-based approach to futurecasting by introducing the concept of cards to the design process.

These card decks  can be used as scenario generators and design tools in a design workshop format to scaffold imagination, facilitate strategic conversation and support creative storytelling about possible futures.

Imagining the future does no longer have be daunting!

The Thing from the Future

This cardset is created by the Situation Lab and is the most ‘gamelike’ of all the cardsets as it offers a competitive aspect (i.e there is a winner at the end of the game. The game features four types of cards describing ‘assets’ of things in the future and is played in several rounds until the deck is exhausted (or time runs out).

There card categories are:

This imagination game aims to challenge players to collaboratively and competitively describe objects from a range of alternative futures. This card game has been likened to Brian Eno’s Oblique Strategies creativity boosting card deck from the 1970s, as well as the more recent Kickstarter funded Cards Against Humanity cards.

This particular card deck has been used as a creative engine behind a number of design ideation workshops such as the Futurematic (A design jam to fill a vending machine with artifacts from the future where participants used the cards to conceptualise designs for objects of possible futures).

These cards are available to buy online and cost $40.

This work kit is created by NearFutureLaboratory (the godfathers of Design Fiction!) and aims to help designers define the core elements of the future product. The goal is to design specific products for the near future based on three cards describing an object, an attribute and design action. The products should then be described, visualised and named. 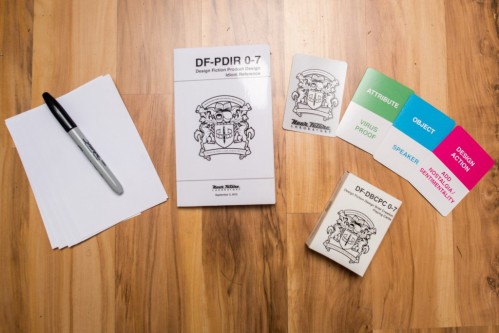 At the time of writing this post, these cards were sold out online

The CKC Scenario Game is a card game adapted by ideasLAB* designed to ‘encourage and provoke both divergent and convergent thinking around collective knowledge construction’. Players are prompted with scenarios called “Future Casts” – ideas about the future.  Players respond to these Future Casts by playing a range of “Response Cards” and “Dark” or “Positive Imagination” cards.These can either introduce new ideas or build upon the ideas of others. 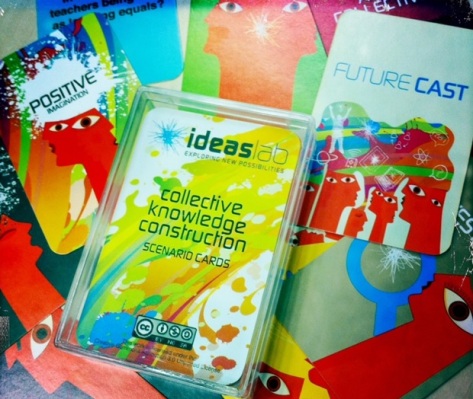 Originally adapted as card game, ideasLAB has now made a Powerpoint adaptation of the game which you can use and adapt in any way you choose – and add your own scenario

This card set was created by SuperFluxto help designers and scientists explore the social, economic and political implications of synthetic biology. The tarot deck comprises six categories of card: Protagonist, Location, Synbio Condition, Year, Operating Environment, and Player mission. Each category had six cards. One side of the card named a specific item, character or point, accompanied by a visual cue. The reverse side listed a couple of questions specific to the card, intended to guide thought and discussion

Even though these cards have a specific focus on synthetic biology, the creators believe that  by substituting this for any other emerging technology.For examples of how these cards were using in a design workshop context and descriptions of the generated future scenario can be found here http://www.superflux.in/work/tarotcards